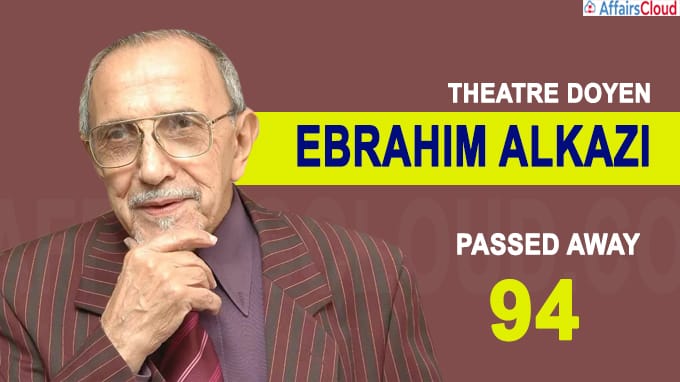 On August 4, 2020 The Father of Modern Indian theatre, Ebrahim Alkazi  passed away at the age of 94 in Escorts Hospital, New Delhi due to a massive heart attack. He was a theatre director, drama teacher, and the longest-serving director of the National School of Drama(NSD) i.e., from 1962 to 1977. He was credited for revolutionising India theatre. He was born on October 18, 1925 in Pune, Maharashtra.

Note- In his tenure as director of NSD he mentored students who became great actors, including Naseeruddin Shah, Nadira Babbar, and Om Puri.

He was also a noted art connoisseur, collector and gallery owner. He founded the Art Heritage Gallery in Delhi with his wife, Roshan Alkazi.

Personal Info– He has a son Feisal Alkazi and a daughter Amal Allana, both well known theatre directors. He was also described as, “last of the Romans”

Ebrahim Alkazi’s contribution towards modern Indian theatre includes the following: bringing in technical aspects of the craft and making the NSD the premier training institute for theatre among others.

The Padma Awards are one of the highest civilian honours of India announced annually on the eve of Republic Day.  The award seeks to recognize achievements in all fields of activities or disciplines where an element of public service is involved.

Nomination– The nomination process is open to the public. Even self-nomination can be made.