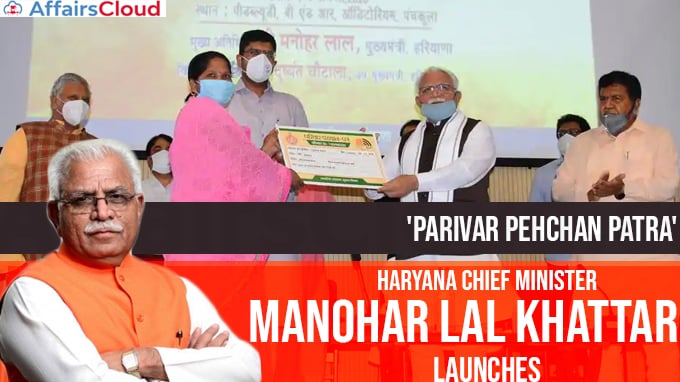 On 4th August 2020, Manohar Lal Khattar, the Chief Minister of Haryana launched a unique identity card, the Parivar Pehchan Patras (PPP), an initiative of the state government developed by the team CMO (Chief Minister’s Office) for effective and efficient delivery of central and state schemes to the people in a transparent way.

To monitor each family (around 54 Lakh) living across Haryana.

i.Under PPP each family will be considered as a single unit and will be allotted a 8 digit unique identification number.

iii.The PPP will hold the data like the head of the family, name, age, income, contact number along with the information about the family’s sector, city, district, village, tehsil, block and district.

iv.Every city and village will have unique code.

ii.Manohar Lal Khattar announced that the welfare schemes of all the departments will be linked with PPP within the next three months.

iii.The migrant workers registered with the Labour Welfare Board of Haryana has been synced with PPP.

i.The effective delivery of services and the reduction in corruption and red-tapism in the system will be achieved by integrating the schemes of all the departments with PPP.

ii.Under this initiative, Ration Cards of all those families would be prepared, which do not have a ration card but are eligible to have one of the appropriate category.

i.The golden data of around 18.19 lakh families out of the 56.20 lakh families of the state has been prepared and the PPP cards for them are being provided.

i.Manohar Lal Khattar distributed the Parivar Pehchan Patras, The Family Identity card to the eligible families at an event organised at Panchkula.

ii.He also announced that the State Government of Haryana has decided to celebrate 2020 as Susashan Sanakap Varsh.

iii.The PPP cards were distributed in the 21 districts of the state on 4th August 2020. He also inaugurated a portal for the registration of unorganised workers through PPP.