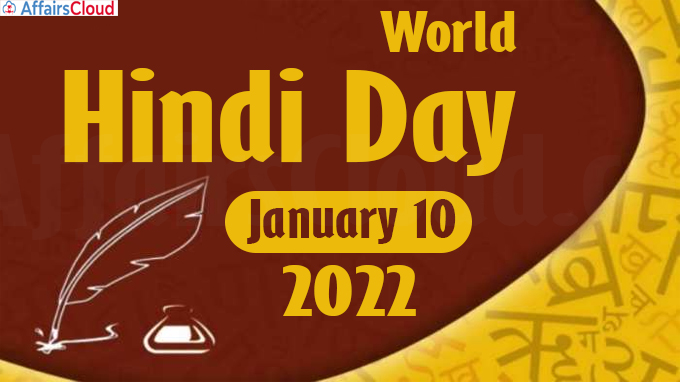 World Hindi Day, also known as Vishwa Hindi Diwas, is annually observed across the globe on 10th January to promote the worldwide use of the Hindi language. The day also marks the anniversary of the World Hindi Conference, which was held on 10th January 1975.

ii.The conference was inaugurated by the then Prime Minister(PM) Indira Gandhi.

Around 122 representatives from 30 countries participated in the conference.

i.During the meeting of the follow-up committee on the World Hindi Conference held on 8th June 2005, the 10th January of every year was proclaimed as World Hindi Day.

iii.Starting from 2006, the Ministry of External Affairs(MEA) has been celebrating World Hindi Day in other nations to promote Hindi across the globe.

The day has been observed in India since 2003.

Annually, India celebrates the National Hindi Diwas on September 14 to commemorate the declaration of Hindi as one of the official languages of the Government of India in 1950.

i.Hindi belongs to the Indo-Aryan branch of the Indo-European family of languages.

iii.Hindi, one of the 22 Indian languages that have been recognised by the eighth schedule of the Indian constitution.