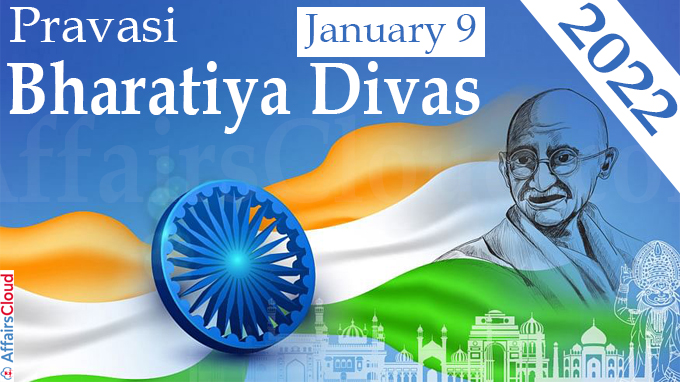 Pravasi Bharatiya Diwas (PBD), also known as the “Non-Resident Indian (NRI) Day” is annually celebrated on 9th January to mark the contribution of the Overseas Indian community to the development of India.This is 17th PBD.

The first ever Pravasi Bharatiya Diwas was celebrated on 9 January 2003.

On 9th January 1915, Mahatma Gandhi returned to India from South Africa and became the greatest ‘Pravasi’.

i.Overseas Indians, also known as NRIs or Persons of Indian Origin(PIOs) are people of Indian birth or ancestry who live outside the Republic of India.

ii.According to the MEA report, around 32 million NRIs and PIOs residing outside India and overseas Indians comprise the world’s largest overseas diaspora.

iii.Every year around 2.5 million Indians migrate overseas, this is the highest annual number of migrants in the world.

i.Pravasi Bharatiya Diwas(PBD) Convention, a flagship event of the Ministry of External Affairs(MEA), provides a platform to engage and connect with Indians across the globe.

ii.PBD Convention has annually organised the diwas from 7th to 9th January since 2003.

iii.The PBD is annually held with an overseas diaspora to enable them to share their knowledge, skills and expertise on a common platform.

About the Ministry of External Affairs(MEA):