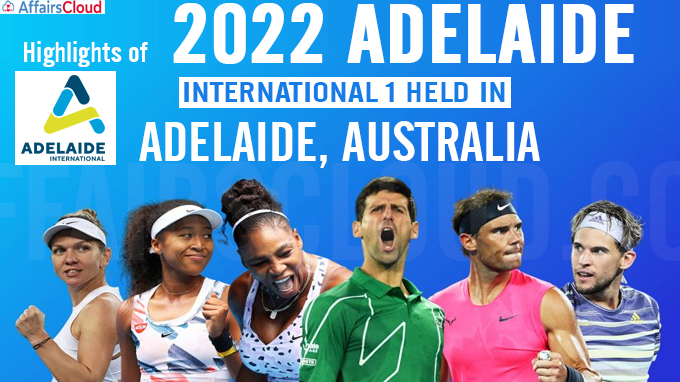 i.The Adelaide International event was first held in Adelaide in 2020.

i.India’s Rohan Bopanna & Ramkumar Ramanathan are teaming up for the first time on the ATP Tour and won the 2022 Adelaide International 1 doubles trophy against Ivan Dodig (Croatia) and Marcelo Melo (Brazil)

ii.Bopanna and Ramkumar were awarded USD 18,700 as prize money, and also earned 250 ranking points each.

iii.It was Bopanna’s 20th ATP doubles title and the first for Ramkumar.

Gael Monfils (French), 35-year-old has won the 11th title of his career against Karen Khachanov (Russia) at the 2022 Adelaide International 1.

World No.1 Ashleigh Barty (Australia) has won her second Adelaide International title with a 6-3, 6-2 victory over Elena Rybakina (Kazakhstan).

The 141st Edition of the US Open Tennis Championship was held in USA’s New York city, which is also the 4th & last Grand Slam title of 2021 held at Arthur Ashe Stadium, New York, USA.

About  Association of Tennis Professionals (ATP):