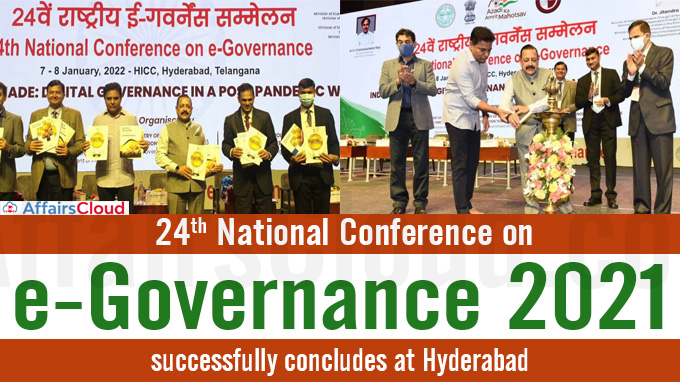 The 24th National Conference on e-Governance (NCeG) 2020-21, which was organised by the Department of Administrative Reforms & Public Grievances (DARPG), Ministry of Electronics & Information Technology (MeitY), in association with the State Government of Telangana, was held on 7and 8 January 2022 at Hyderabad, Telangana.

i.The NAeG 2020-21 were conferred during the conference, 26 awards were presented under the 6 categories of the Award Scheme to Central Ministries/Departments, State/UT Governments, Districts, Local Bodies, Public Sector Undertakings and Academic & Research Institutions.  The awards include 12 Gold, 13 Silver and 1 Jury Award.

ii.The national award for e-governance golden award was conferred to eCourts Mission Mode Project of Department of Justice in the Law Ministry under the category of ‘Excellence in governance in government process re-engineering for digital transformation’.

iii.Chhattisgarh’s state labour department was conferred with the golden award for e-Shramik Seva under the ‘Universalizing Access including e-Services’. Rs 2lakh has been given as award money.

‘Hyderabad Declaration’ on e-Governance was adopted in the two-day conference for collaboration between the Government of India and State Governments.

i.Transform citizen services through the use of technology by leveraging the artifacts of India Stack that include Aadhaar, UPI (Unified Payments Interface), DigiLocker, UMANG (Unified Mobile Application for New-age Governance), e Sign and consent framework.

iii.Operationalize the data governance framework to facilitate data sharing within Government entities as also make available all data on data.gov.in except for a negative list.

vi.Replication of awarded projects under National Awards for e-Governance 2020 – 21 and their nomination for dissemination of best practices through Regional conferences

vii.Adoption of e-office version 7.0 in all ministries and departments.

Other Events: An Exhibition including a Wall of Fame organised to showcase India’s achievements in the field of e-Governance. Discussions were held on six sub-themes and parallel breakout sessions also held on different themes to exchange views between the Award winners and Unicorns.

According to the report of 6th edition, Public Affairs Index (PAI 2021) by the  Public Affairs Centre (PAC), a Bengaluru- based non-profit think tank, the top three slots have been taken by Kerala, Tamil Nadu and Telangana among 18 large states.