On January 15, 2020 the World Economic Forum(WEF) released the 15th edition of the “Global Risk Report 2020: An Unsettled World”.  This report is a part of WEF’s Global Risks initiative and presents about the major risk the world is expected to face in the future. It is also to be noted that the year 2020 marks the 50th anniversary of the World Economic Forum, with the 2020 theme being “Stakeholders for a Cohesive and Sustainable World.”The report in detail are as follows: 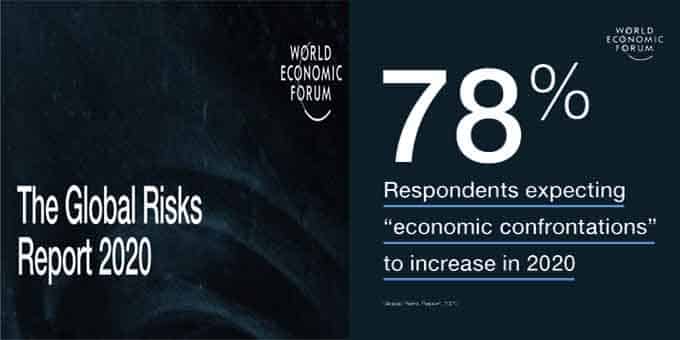 15th Global Risk Report 2020:
Climate accounts for Top5 crisis: As per the report for the 1st time in the survey’s 10 year outlook, severe threats to the climate account for the top 5 long term risks with extreme weather events, human-made environmental damage and disasters and major biodiversity loss and natural disasters from earthquakes to tsunamis.

ii.Climate change: 90% of the respondents to the Global Risks Perception Survey (GRPS) expect that “extreme heat”, “destruction of ecosystems” and “health impacted by pollution” will worsen in 2020.

i.The survey rated “information infrastructure breakdown”will be  the 6th most impactful risk in the years until 2030.

ii.The multistakeholder community and the Global Shaper has identified cyber issues such as cyberattacks and data fraud or theft, within the list of top 10 long-term risks.