On January 16, 2020 the Russian lawmakers have approved Russian President Vladimir Putin’s proposed candidate Mikhail Vladimirovich Mishustin (53), the head of the Federal Tax Service, as the next prime minister of the country. He replaced Dmitri Anatolyevich Medvedev who resigned from his post. 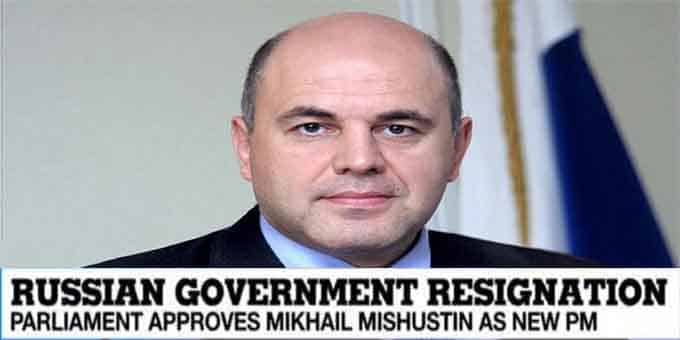 i.Mass resignation: Mr. Putin proposed major changes in the constitution of Russia that would spread political power more evenly. Shortly after the proposed changes by Putin, Dmitri Medvedev resigned as Prime Minister (PM). Along with Medvedev the Russian cabinet also made a mass resignation.

ii.Medvedev’s new designation: Soon after the resignation of Medvedev as the prime minister of Russia, Putin was appointed as the deputy head of the country’s Security Council. The council acts as an advisory board to  the president.

iii.Mikhail as new PM: Putin’s proposal to appoint Mikhail is seen as a move that could help him (Putin) remain in power indefinitely even after his presidential term ends in 2024.

i.The 2020 address was delivered at Moscow’s Manezh exhibition hall, Russia. It was Putin’s 16th annual address before an audience including government ministers, judges from the constitutional and supreme courts, leading regional officials, and other members.

iii.GDP growth: The annual investment growth should be at least 5% and its share in the country’s GDP(Gross Domestic Product) and should be increased from the current 21% to 25% in 2024.

iv.Population building:  Putin ensured sustainable natural population growth by the middle of the coming decade. He proposed that in 2024, the birth rate should be 1.7 children per woman.