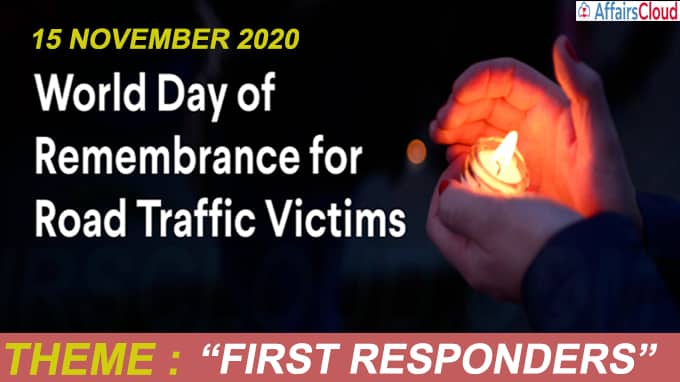 United Nations (UN)’s World Day of Remembrance for Road Traffic Victims(WDoR) is annually observed across the globe on the third Sunday of November. The day provides an opportunity to remember the victims who were killed or injured in road accidents.

The day aims to spread awareness for the global efforts to reduce the casualties of road accidents.

According to the World Health Organisation(WHO)’s regional office for Europe the theme of the 2020 WDoR is “First Responders”, with a focus to recognise the men and women who rescue and support the victims of road trauma.

ii.The United Nations General Assembly(UNGA) adopted the resolution A/RES/60/5 on 26th October 2005 and proclaimed the 3rd Sunday in November as the World Day of Remembrance for

Road Traffic Victims as the appropriate acknowledgement for the victims of road traffic crashes and their families.

i.In March 2010, the UNGA proclaimed the Decade of Action for Raod Safety 2011- 2020 to save millions of lives by building road safety management capacities, improving the safety of the road infrastructure, developing the safety of vehicles and enhancing the behaviour of road users and post-crash response.

ii.The UN also organised the Global Road Safety Week to highlight the plights of children on roads and to create action to ensure the safety of children.

According to the WHO, more than 1.35 million people have died and around 50 million were injured in road accidents during 2018.

ii.Road injuries are the leading killer of people aged between 5 and 29 years.

iii.The report also stated that the progress to achieve the Sustainable development goal (SDG) target 3.6, which calls for a 50% reduction in the number of deaths due to road traffic by 2020 is not sufficient.

iv.More than 50% of the victims of the road accidents are the vulnerable road users like, pedestrians, cyclists and motorcyclists.