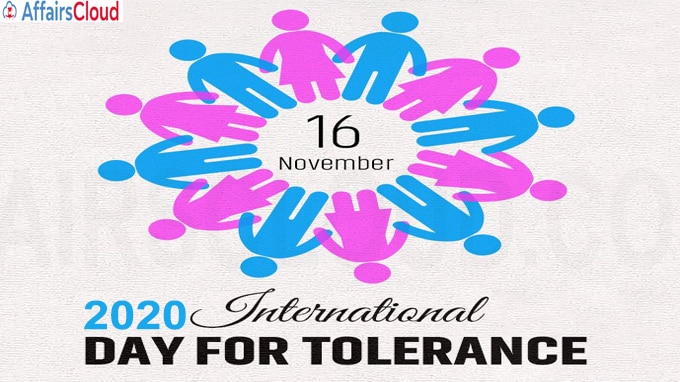 The United Nations(UN)’s International Day for Tolerance is annually observed across the globe on 16th November with a goal to get the educational institutes and general public to see tolerance as a crucial element of the society.

i.The United Nations General Assembly(UNGA) adopted the resolution A/RES/51/95 in 1996 to invite and proclaim the 16th November as the International Day for Tolerance.

ii.This resolution followed the United Nations Year for Tolerance – 1995, which was proclaimed by the UNGA in 1993 at an initiative of the United Nations Educational, Scientific and Cultural Organization(UNESCO), as outlined in the Declaration of Principles on Tolerance and Follow-up Plan of Action for the Year.

iii.The member states of UNESCO adopted the Declaration of Principles on Tolerance for its 15th anniversary on 16th November 1995.

Declaration of Principle on Tolerance:

i.The UNESCO created the Declaration of Principles on Tolerance on 16th November 1995, as a method to define and create awareness of tolerance for all the governing and participating bodies.

ii.The declaration qualifies tolerance as a moral duty and also as a political and legal requirement of individuals, groups and states.

iii.It highlights that states should draft new legislation to ensure equality of treatment and opportunity to all groups and individuals of the society.

UNESCO in partnership with New Delhi Office, released an illustrative book titled “A Day With Gandhi” authored by Aarya Chavda to pay tribute to the values of peace, non-violence and equality.

i.UNESCO created the UNESCO-Madanjeet Singh Prize in 1995 to mark the United Nations Year for Tolerance and the 125th birth anniversary of Mahatma Gandhi.

ii.The prize is presented to institutions, organizations or persons, who have contributed to tolerance and non-violence.

iii.The prize is awarded for every 2 years on the International Day for Tolerance and the winner is presented with the sum of 100,000 USD.

Centre Résolution Conflits (CRC) from the Democratic Republic in Congo received the 2020 UNESCO-Madanjeet Singh Prize for its efforts to defend the human rights and its commitment to rescue the child soldiers from militia groups and rehabilitation and reintegration into their home communities.

i.Madanjeet Singh a diplomat, artist and an internationally known Pakistani author of numerous books on arts and other subjects related to UNESCO’s programmes and ideas.

ii.The UNESCO’s executive board recognised his contribution to communal harmony and peace and created the UNESCO-Madanjeet Singh Prize in 1995.

iii.He created the South Asia Foundation (SAF) to promote sustainable cultural, educational and economic development throughout the region in 2000.