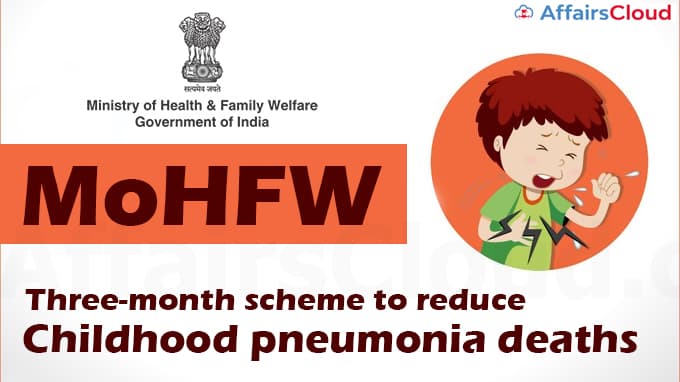 On November 12, 2020 The Union Ministry of Health & Family Welfare (MoHFW) launched a 3 month accelerated SAANS (Social Action and Awareness to Neutralise Pneumonia Successfully) campaign to reduce childhood pneumonia deaths. The scheme focuses to raise awareness regarding childhood pneumonia and its early intervention, enabling the caregivers across the country to identify critical symptoms at early stages and immediate care-seeking with qualified providers.

Target of the Initiative– To reduce less than 5 pneumonia deaths, per a 1000 live births, to less than 3 deaths by 2025 through the accelerated SAANS (Social Action and Awareness to Neutralise Pneumonia Successfully) initiative.

SAANS campaign was launched in 2019. It complements the national childhood pneumonia management guidelines through a three-pronged approach to protect, prevent and treat pneumonia among children.

Statistics in regard to India’s Child Mortality:

i.India has a higher decline in the reduction of child mortality (71%) in comparison to the global reduction of 59% between 1990 and 2017

iv.From the current levels, the National Health Policy targets to reduce it to 23 deaths by 2025.