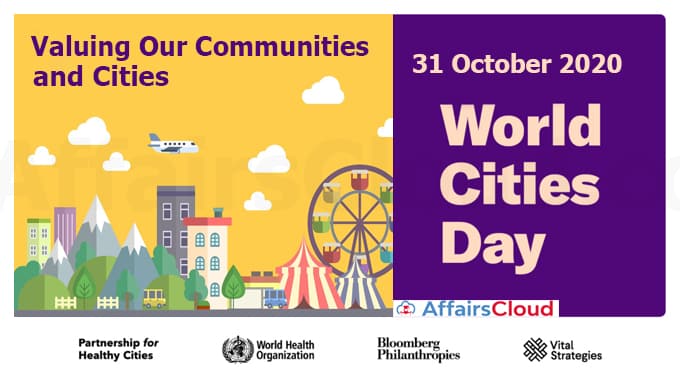 i.The Theme of World Cities Day 2020 is ‘Valuing our communities and cities’, The General theme is “Better City, Better Life”.

i.During the Observance, UN-Habitat’s flagship World Cities Report was released which focuses on the Value of Urbanization.

ii.Impact of COVID-19 has completely re-shaped urban life around the Globe.

iii.The theme of 2020 highlights the key role played by the local community in contributing to keeping people safe and maintaining economic activities.

ii.Cities have become a point of confluence where economic, social, cultural and environmental factors converge to tread the path of urban development.

iii.By 2035, the World’s Most Populous city will be Jakarta (Indonesia), pushing the current holder of that title, Tokyo (Japan) to Second Place. They will be followed by Chongqing (China), Dhaka (Bangladesh) and Shanghai (China).

iv.Cities will be responsible for as much as 70% of Global CO2 (Carbon dioxide) emissions. With urban transport, and energy consumption of buildings contributing most to the emissions.

Background:
United Nations General Assembly has designated the 31st of October as World Cities Day, by its resolution 68/239.It was launched on 31 October 2014 in Shanghai, China to emphasize the world’s urban challenges and engage the international community towards the New Urban Agenda.