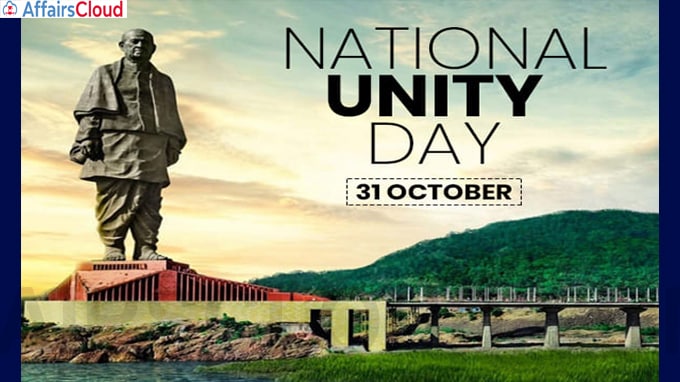 National Unity Day was introduced by the Government of India in 2014.

i.Sardar Vallabhbhai Patel played a crucial role in integration of India from 560 princely states as the First Deputy Prime Minister and Home Minister of Independent India.

ii.The day is being observed to acknowledge the efforts of Patel to unite India.

i.Prime Minister Narendra Modi visited the Statue of Unity in Gujarat’s Kevadia and paid his respect to Sardar Vallabhbhai Patel.

ii.He inaugurated India’s First seaplane service, which will offer air connectivity from Sabarmati Riverfront in Ahmedabad to Statue of Unity in Kevadia, Gujarat. It will be operated by Spicejet.

i.The PM administered the Ekta Pledge and witnessed the Ekta Diwas Parade on the occasion of the day.

i.On October 30, 2020 PM Modi inaugurated a cruise service near the Statue of Unity. The cruise will cover 6 kilometres in 40 minutes.

ii.He inaugurated Ekta Mall, a Handicraft emporium spread over 35, 000 square feet in Kevadia. Handicrafts from all over the country will be up for sale at the mall.

iii.He also inaugurated a Nutrition Park and a Safari Park on October 30, 2020.

iv.The Safari Park is spread over 375 acres and has 1100 Species of Birds from India and abroad and about 100 animals.

ii.Indira Gandhi was assassinated by her bodyguards on October 31, 1984.