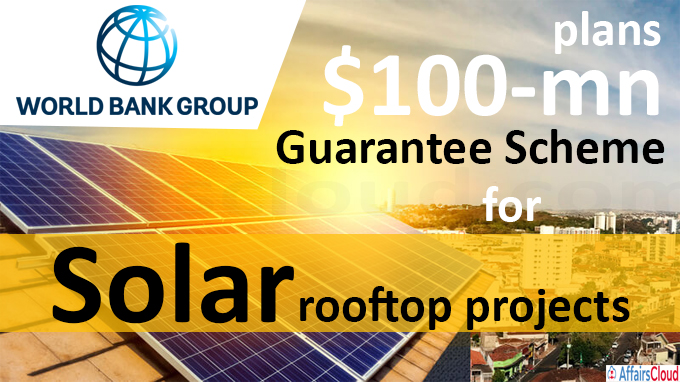 In order to boost India’s rooftop solar programme, the World Bank (WB) is planning to launch a $100-million (~727Crore Indian Rupees) credit guarantee scheme along with the State Bank of India (SBI) and the MSME ministry.

Efforts were taken by World Bank :

i.WB credit guarantee scheme will be provided as a Green finance i.e. financing for sustainable climate. Green finance will be a priority theme at the 26th session of the Conference of the Parties (COP 26) to the United Nations Framework Convention on Climate Change in Glasgow later in 2021.

ii. World Bank has supported India’s green economy finance and in 2016 had launched a $625 million lending programme with SBI for rooftop solar units for the commercial, industrial, and institutional sectors.

iii.Already WB made an investment of Rs 4.7 trillion in India’s renewable energy space in the last 6 years, with an expected Rs 1 trillion investment opportunity annually till 2030.

iv.It should be noted that India added around 4 gigawatts (GW) of rooftop solar capacity out of its 40GW target by 2022. These installations are a part of India’s renewable energy target of 175GW to help reduce its carbon footprint by 33-35% from the 2005 levels, as part of global climate change transition commitments adopted by 195 countries in Paris in 2015.

i.As a part of implementing the new National Education Policy (NEP), 2020, the Cabinet approved the implementation of Rs 5718 crore Strengthening Teaching-Learning and Results for States (STARS) project with a financial aid from WB amounting to US $500 million (approximately Rs. 3700 crore).