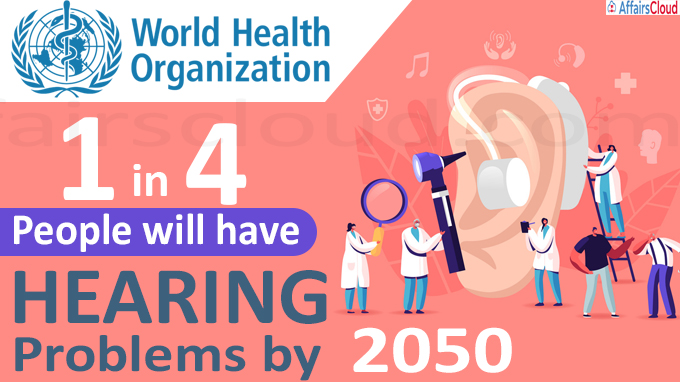 On March 2, 2021, the World Health Organization’s (WHO) released its first World Report on Hearing stating that nearly 2.5 billion people worldwide or 1 in 4 people will suffer from hearing problems by 2050. At present one in five people worldwide have hearing problems. If the issue is not properly addressed, there will be a loss of trillion US dollars every year.

What is the key contributor to hearing problems?

It is poor access to treatment as low-income countries have fewer professionals to treat the hearing problems of patients. Notably, 80% of the people with hearing loss live in such countries. Even in richer countries the access to care is often uneven. There is also a lack of accurate information and the stigma surrounding ear disease and hearing loss.

i.Reduction of noise in public spaces

ii.Increasing vaccinations for diseases such as meningitis that can cause hearing loss

iii.Systematic screening to identify the problem

i.The World Economic Forum (WEF) has released the Global Risks Report 2021, 16th Edition. The findings of the report are based on the Global Risks Perception Survey (GRPS) undertaken by over 650 members of WEF’s diverse leadership communities.

ii.According to the report ‘Asia and the Pacific Regional Overview of Food Security and Nutrition 2020: Maternal and child diets at the heart of improving nutrition’, based on Global estimates the number of people facing severe food insecurity was estimated to double to 265 Million by the end of 2020 due to pandemic.