March 8th is celebrated as Women’s day across the globe every year since 1975.News from various fields with special emphasis on Women’s day have been combined to give special importance for this day.

The largest private sector lender ICICI bank has announced a work-from-home programme to the women workers as a special gift on Women’s day.

As an initiative to promote women joining in Aviation sector, Air India on Monday flew its first world’s longest all women flight from New Delhi to San Francisco. 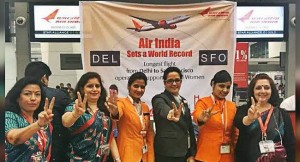 As a part of the global Women’s day celebrations various organizations launch special plans for women. Tata housing also joined the list by tying up with SBI to provide special home loan.

To give more emphasis on empowerment of Women, the SBI life insurance launched the Smart Women Advantage scheme as a part of Women’s day celebrations.

Though many steps are taken to empower women in various fields, the representation of women in legislation is considerably very low. On the day of celebration it is unfortunate to know that India’s rank in women representation has slipped from 117 to 144.

With the aim of supporting the as Self help groups of women to sell their products the Union Minister for Women and Child Development Maneka Sanjay Gandhi on 7 March 2016 launched Mahila e-Haat portal in New Delhi.