On December 19, 2019 The World Health Organisation (WHO) released its 3rd edition of global report on trends in prevalence of tobacco use 2000-2025. As per the report despite decline in tobacco usage, India is off track to achieve 30% reduction in tobacco use by 2025 when compared to its 2010 levels. 163 nations besides India are also not on track in this regard. The report in detail are as follows: 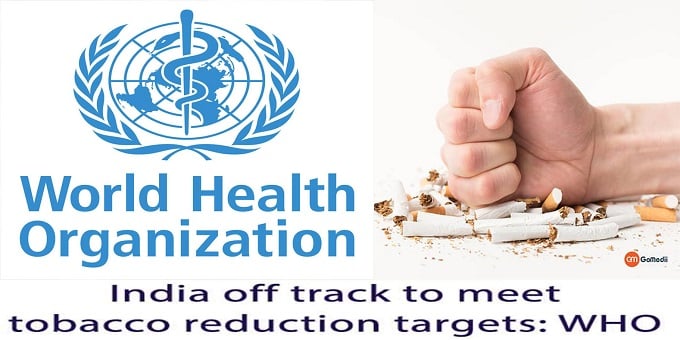 i.Tobacco usage: Over the past 2 decades, usage of tobacco has fallen by 60 million people mainly due to the reduction of usage by females. The male tobacco use had risen by around 40 million over the same period. For the 1st time, the WHO projects that the number of males using tobacco is on the decline.

ii.America region: The only region that is expected to achieve 30% relative reduction in the prevalence of tobacco use by 2025 is the Americas region.

iii.Target achievable nations: 1 out of 8 countries in Southeast Asia, 3 out of 27 countries in Western Pacific region, 6 out of the 53 countries in European region, 1 out of 23 in the Eastern Mediterranean, 13 out of 35 in the Americas and 8 out of 46 in the African region will achieve targets in reducing tobacco consumption.

vii.Anti tobacco programmes: The recent report on Global Tobacco Epidemic 2019 states that 1 in 3 countries use best practices of monitoring the tobacco usage, but only very few countries achieved this in 2018 than in 2016.