On December 22, 2019 the website of the Pradhan Mantri Krishi Sinchayee Yojana (PMKSY) (https://pmksy.gov.in) released the data on states with coverage of area under micro-irrigation (MI) for the year 2019. As per the data, Tamil Nadu(TN) topped the list in coverage under micro-irrigation. Out of the 3.64 lakh hectares brought under MI, TN accounts for around 1.39 lakh hectares, i.e., 38% of the total coverage in the country. 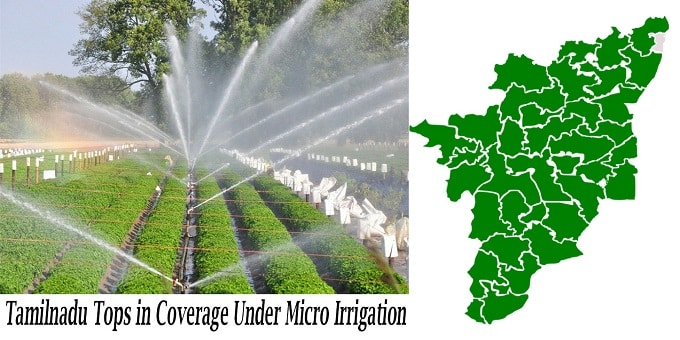 Data on coverage under micro-irrigation for 2019

iii.TN targets to cover more area: With about three months (January to March) to go for the end of the current fiscal year (FY 2019-20), TN hoped to cover around 1 lakh more hectares of area. It targets 2.5 lakh hectares.

iv.Orders issued till now in TN: As of now, work orders for about 3 lakh hectares have been issued. A total of Rs.700 crores has been spent.  The govt. also plans to spend Rs. 670 crore for the installation of MI systems, including sprinkler and drip irrigation.

vi.Pumpsets sanctioned in TN:
The Centre has sanctioned for installation of 17,500 solar agricultural pumpsets in TN. This has been done under the Pradhan Mantri Kisan Urja Suraksha evem Utthan Mahabhiyan (PM-Kusum) scheme.

About Pradhan Mantri Krishi Sinchayee Yojana(PMKSY):
Fact- It is a national mission to improve farm productivity and ensure better utilization of the resources in the country that aims to improve on-farm water use efficiency through a number of measures such as MI.
Launch- 1st July, 2015.
Scheme outlay- Rs. 50,000 crores for a period of 5 years (2015-16 to 2019-20).
Agency responsible- Ministry of water resources, ministry of rural development, ministry of agriculture.