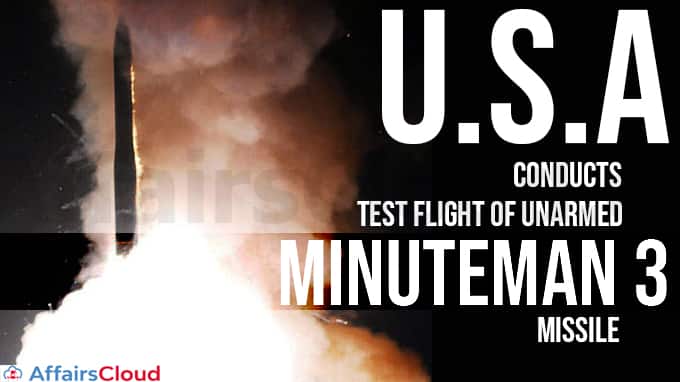 On August 4, 2020, the United States (US) Air Force conducted a scheduled test launch of an LGM-30G Minuteman III, an intercontinental ballistic missile (ICBM) carrying a load of three unarmed reentry vehicles, from Vandenberg Air Force Base in California, US to a target in the Pacific Ocean. Missile’s three reentry vehicles traveled 4,200 miles (6,759 kilometers) to the Kwajalein Atoll in the Marshall Islands as part of a developmental test.

Minuteman III, an Intercontinental ballistic missile manufactured by Boeing is a long-range, solid-fuel, three-stage ICBM with the capability to carry single or multiple nuclear warheads. It has a range of more than 6,000mi (5,218 nautical miles) and speed of approximately 24,000km/h (15,000mph) at burnout.

On April 14, 2020, According to the Defense Security Cooperation Agency, the US (United States) President Donald Trump’s administration has approved the sale of Harpoon Block II air-launched anti-ship missiles & MK 54 lightweight torpedoes priced a total of $ 155 million to India to combat regional threats and increase the security of its soil.