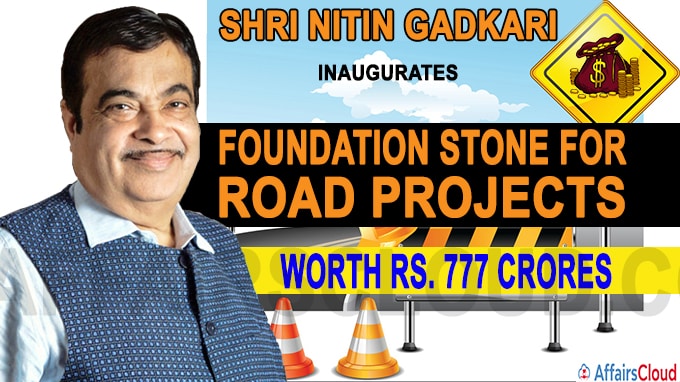 The projects will be crucial for improving mobility and providing socio-economic development for the people of Gadchiroli district. The region is affected by Left Wing Extremism (LWE).

i.855 metre major bridge across Pranahita river on Nizamabad – Jagdalpur Road (NH 63) at a cost of Rs 168 crores.

ii.630-metre-high level bridge across the Indravati River near Patagudam on Nizamabad – Jagdalpur Road (NH 63) at a cost of Rs 248 crores.

i.Union Minister highlighted the increase in total length of National Highway in Gadchiroli district from 54 kms to 647 kms.

ii.A total of 44 road projects of 541 kms length with an outlay of Rs 1740 Crores has been allocated for Gadchiroli district.

iii.The projects in the Gadchiroli district assume significance as it would help in enabling industrial development, job creation and upliftment of living standards of people. It will also help in maintaining the law and order in the naxal affected region.

i.Four major bridges on the rivers Perimilli, Bandiya, Pearikota and Wainganga river were inaugurated as the existing bridges are narrow and get submerged during monsoons.

ii.The bridge across the river Wainganga will improve the connectivity between Gadchiroli and Chandrapur District.

iii.The saved amount of Rs. 50 crores from the project will be utilized to construct 14 Minor Bridges and ensure seamless transportation in the accessible areas of Gadchiroli districts.

i.The Wainganga river is one of the most important rivers of Maharashtra, it divides Gadchiroli & Chandrapur Districts.

iii.Nitin Gadkari has proposed construction of a bridge on Wainganga river, along National Highway at a total cost of Rs. 99 Crore.

iv.The bridge will be completed by NHAI and PWD and will bring prosperity to small villages in the districts of Gadchiroli & Chandrapur.

i.The Union Minister is expected to approve 35 km road development between Alapalli-Bamragarh in 2020 and the remaining 65 kms in the 2021 financial year.

ii.He also sought the Maharashtra Government’s nod to connect Desaiganj-Brahmapuri with Nagpur under Broad Gauge Metro connectivity plan, which will reduce the travel time to 1 hour and 15 minutes from the current 2 and half hours.

ii.The central Government has aimed to replace all the level crossings on National Highways (NH) by Road Over Bridges / Road Under Bridges under the Setu Bharatam scheme.