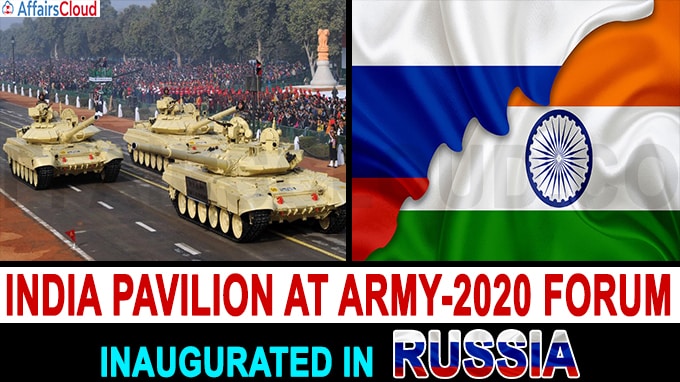 The 6th International Military-Technical Forum “Army-2020” was held between August 23-29, 2020 at the Patriot Park near Moscow, Russia which was organized by Russian Defence Ministry and operated by International Congresses and Exhibitions Ltd. (ICE Ltd). During the forum, Indian Pavilion was inaugurated by Secretary (Defence Production) Raj Kumar and Indian Ambassador to Russia D.Bala Venkatesh Varma.

-For the first time, a line of 23 tanks and armoured vehicles were deployed in an open area in Patriot Park, as a part of a unique exhibition tracing the development of Russian tanks throughout history.

-The forum also showcased over 730 pieces of Russian weapons and equipment, as well as 28,000 exhibits from industrial enterprises for a free inspection.

-Delegations from at least 70 nations attended the high-profile event. Belarus, Brazil, India, Kazakhstan, and Pakistan presented the national expositions at the Patriot Congress and Exhibition Centre.

The first regiment of S-400 anti-air system by Russia will be delivered to India by the end of 2021.

June 6th is annually celebrated as the Russian Language Day by the United Nation(UN) to promote and support Multilingualism and cultural diversity and to celebrate the birthday of the famous Russian poet Alexander Puskin who was born on 6th June 1799.