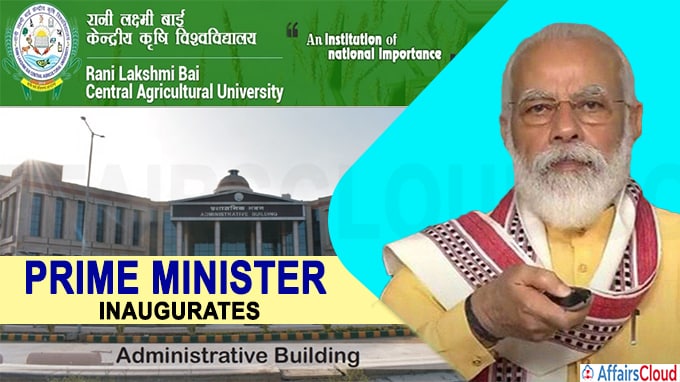 i.The Central Agricultural University is expected to improve the education infrastructure and contribute to cutting edge research in agriculture and further farmer welfare.

i.The RLB Central Agriculture University is located in Jhansi and is a prominent institute in the Bundelkhand region.

ii.The University started its first academic session in 2014-15 and offers Undergraduate and Postgraduate courses in Agriculture, horticulture and forestry. As the main buildings were getting ready, the classes were operating from Indian Grassland and Fodder Research Institute in Jhansi.

iii.At present, there are three Central Agricultural Universities in the country and more National Institutions IARI Jharkhand, IARI Assam and Mahatma Gandhi Institute for Integrated Farming in Motihari, Bihar are in line to be established soon.

v.Union Minister Narendra Singh Tomar pointed out the strengthening of farming activities in North-East by agricultural education and research. The scholarships for the Ph. D students have also been increased to Rs. 31000 per month.

ii.The Government has also set up a special dedicated fund of Rs 1 Lakh crore for providing better facilities and promoting industries in a cluster based approach in the agriculture sector.

iii.Efforts are being taken to introduce Agriculture as a subject at Middle school level in villages to develop agriculture related understanding in the student’s minds.

It will also enable students to give information about agriculture and modern farming techniques & marketing, to their family members, to promote Agro-entrepreneurship in the country.

iv.He emphasized the importance of connecting farming with Modern Technology by sharing an example of recent locust attack, where Drones and Helicopters were used to control the menace of the Locusts.

During the address of the meeting, Prime Minister Narendra Modi sanctioned 500 water projects worth Rs 10, 000 crores to improve the water availability in the drought prone Bundelkhand region.