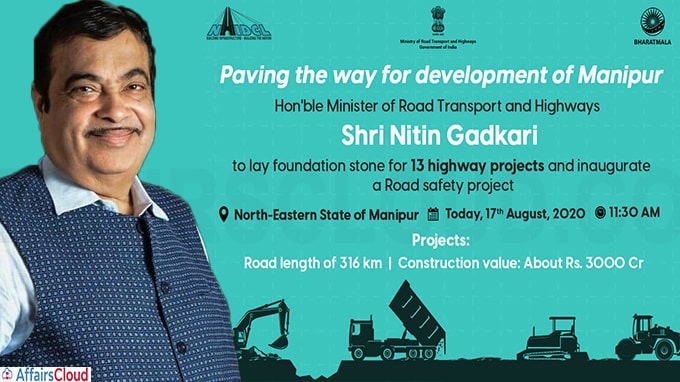 VK Singh noted that the Highway projects are in alignment with the Government’s Act East Policy and special emphasis has been given to the development of North East States under this Policy.

i.Under the Highways project, National Highways and Infrastructure Development Corporation Limited (NHIDCL) and Manipur State Public Works Department(PWD) will carry out the development works of the state of Manipur.

ii.The 13 highway projects involve a Road Length of 316 Kilometers with a total financial outlay of about Rs. 3000 crores.

iii.The Highways are expected to pave the way for development of Manipur and will foster better connectivity, convenience and economic growth in the state of Manipur.

iv.The Project will include the four laning of certain sections of Imphal-Moreh Road, which is essential in ensuring India’s connectivity with the South East Asian Countries.

v.The project includes the widening to two-lane with a hard shoulder of Churachandpur to Tuivai section of NH 102B and Pallel-Chandel section of NH-102C.

i.Union Minister Nitin Gadkari pointed out the completion of dredging activities in Brahmaputra and Barak river which could possibly transport people and consignments and also link the state capital of Imphal.

ii.In the future, four lane roads from Kohima to Imphal are to be taken up with the estimated cost of Rs. 2663 crore.

During the meeting, Union Minister Nitin Gadkari suggested the adoption of alternative fuel for Public Transport in the North Eastern states as it is cheap and also environmentally friendly.

Ethanol, methanol, bio-compressed natural gas, dimethyl ether and electricity are some of the alternative or green fuels.

Manipur is the starting point of the trilateral highway which connects India, Myanmar and Thailand, and it also plays an important role as it shares the International Border with Myanmar.

ii.Thangjam Dhabali Singh, Manipuri allopathic doctor, was conferred with “Order of Rising Sun-Gold and Silver Rays” by the Japan government for promoting a better understanding of Japan in India and deepening ties between 2 countries.