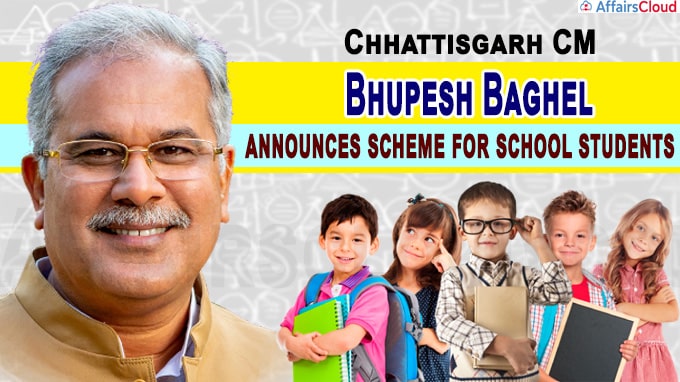 Chhattisgarh Chief Minister Bhupesh Baghel launched the ‘Padhai Tuhar Para’ scheme  to enable school students to learn from their respective localities as the classes are being suspended due to the outbreak of the coronavirus.

It was launched by the state government earlier during the lockdown. It yielded better results and around 22 lakh children are getting its benefit.

It will be introduced to provide study materials to students in remote areas who do not have access to internet facilities.

It will be launched in urban areas under which door-to-door health facilities will be provided to people through 70 mobile medical units in all the 14 municipal corporations.

committees will be established or new appointments and promotions in the state. It will be mandatory to include women representatives in the committees to increase the participation of women in the administration and to protect their interests

i.A dedicated fund will be created for contributions from people towards the development of the state government’s ‘Ram Van Gaman Tourist Circuit’ project.

ii.Nine sites have been selected in the first phase of the project, chief minister Bhupesh Baghel said on Saturday during his address at the Independence Day function in capital Raipur.

iv.In the first phase of the project, eight of the selected places falling on the forest route taken by Lord Ram will be developed as tourist destinations at a cost of Rs 137.45 crore..

v.As part of the project, Chandkhuri, believed to be the maternal home of Lord Ram, will be developed as a grand tourist-pilgrimage site.

i.Principal Secretary Rashmi Arun Shami of Madhya Pradesh (MP) launched “Hamara Ghar-Hamara Vidyalaya” scheme over a virtual platform to maintain academic regularity of the students during the Lockdown due to COVID-19 pandemic. The scheme will start from 6th July 2020.

ii.The Chief Minister of West Bengal Mamata Banerjee launched two schemes ‘Sneher Porosh’ to provide support for the migrant workers and ‘Prochesta’ to help the workers of the unorganised sector of Bengal to enable them to earn their living in the lockdown situation.