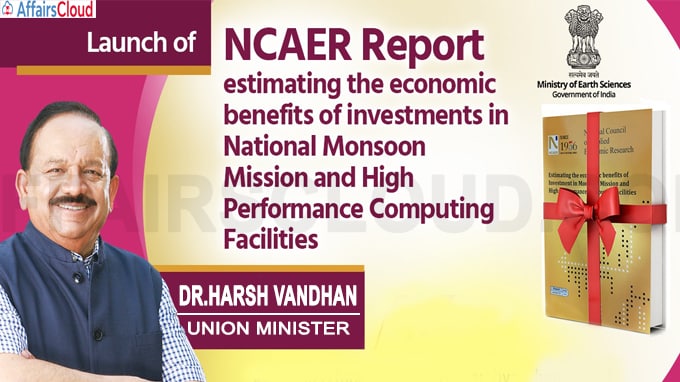 The Objectives of the report are:

i.To Estimate the economic benefits of investments made in the National Monsoon Mission (NMM) and High Performance Computing (HPC).

ii.To examine the role of improved accuracy of weather prediction in improving livelihood of farming, livestock rearing and fishing communities.

iii.To understand the importance of weather-based advisories in decision making and reducing loss in agricultural households and fishery households.

i.The report states that for every rupee spent by Government on NMM and HPC programs of MoES, Country gains economic benefits worth Fifty rupees, which is 50 times more benefit on investment over the next Five Years Period.

ii.The report refers to economic benefits as direct monetary gains to crop farmers, livestock rearers, and fishermen in the country.

iii.With an initial investment of ~ INR 1000 crores, NMM and HPC facilities have shown a 50-fold increase in their economic benefits.

ii.80% of Farmers and 83% of livestock owners who received information on natural calamities have reduced losses occurring due to them.

iii.98% farmers and 76% of livestock owners have made modifications to at least one of the critical practices based on weather advisories & income gain.

v.According to the report, Majority of livestock owners (96%) of weather advisories are improving the practice of vaccination against seasonal disease.

80% of Farmers and 83% of livestock owners who received information on natural calamities have reduced losses.

ii.82% fishermen are using OSF (Ocean State Forecast) advisories before venturing out for fishing into sea and 87.7 % of fishers use OSF advisory on a daily basis, compared to 15.1 % before 2015.

iii.Following the OSF advisory, 95% of them have reported to have avoided empty trips saving nearly INR 18.25 crores of operational cost.

v.97% of fishermen have received information about floods or cyclones on time, and 86% were able to minimize losses due to this.

i.Total annual economic benefits to Agricultural households is INR 13, 331 crores and incremental benefit over next five years is estimated to be about IN$ 48, 056 crores for farming community.

ii.Annual income gained by fisher households is estimated to be INR 663 Crore and present value of benefits to fishermen comes to around INR 2391 crores over a period of 5 years.

iii.Therefore, a total of INR 50, 447 crores are the present value of economic benefit to agricultural households and fisherfolk realised over a 5-year period.

26.6 % of total benefits are attributed to women’s contribution.

The full report can be accessed here.

iii.The successful development of the Global Ensemble Forecast System for short and medium-range prediction at 12 Kilometers and its operationalization in 2018 were done by NMM.

iv.NMM played a vital role in augmentation of HPC facilities from 1 PetaFlop to 10 PetaFlop.

ii.On May 7, 2020, In the midst of Coronavirus (COVID-19) Crisis, the Regional Meteorological Centre of the Indian Meteorological Department (IMD), has included the areas of Gilgit-Baltistan and Muzaffarabad, which are parts of PoK (Pakistan-Occupied-Kashmir) in its weather forecasting for the 1st time.