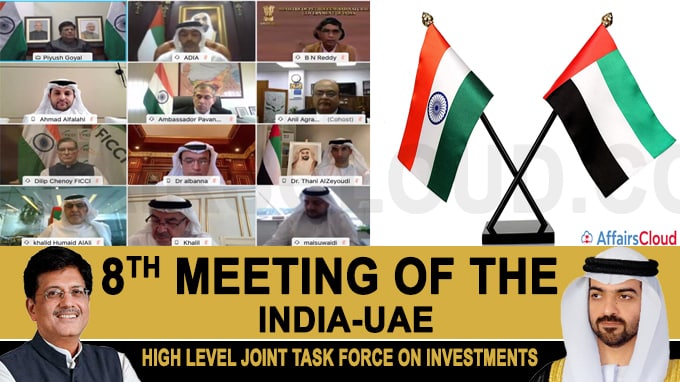 On November 3, 2020 India hosted the 8th Meeting of the India-UAE(United Arab Emirates) High Level Joint Task Force on Investments(the Joint Task Force)  virtually due to the ongoing COVID-19 pandemic. The meeting was co-chaired by Piyush Goyal, Union Minister of Railways, Commerce & Industry and Consumer Affairs and Public Distribution, Government of India and His Highness Sheikh Hamed bin Zayed Al Nahyan, Member of the Executive Council of the Emirate of Abu Dhabi.

Note– India and UAE noted the positive outcomes that were achieved by the Joint Task Force and also expressed satisfaction at the level of bilateral trade and investment to date.

i.Both countries agreed to further explore ways to facilitate investments in key sectors in order to strengthen the economic ties .

ii.India & UAE agreed to maintain their dialogue and further build on the considerable achievements of the Joint Task Force.

iii.Both sides agreed that the two civil aviation authorities need to continue to work  combinedly on a priority basis, for their mutual benefit, to ensure speed  normalization of air transport operations between the two countries.

iv.The two countries agreed that the recent COVID-19 challenges had enhanced the need to encourage investment and cooperation in areas of mutual interest with an aim to stimulate economic activity.

v.Both sides reiterated the importance of addressing specific perceived barriers to trade, namely issues relating to anti-dumping duties and measures etc., between the two countries, with an aim to further reinforce the trade and economic ties between them.

i.India & UAE reviewed the existing UAE special desk (‘UAE Plus’) and the Fast Track Mechanism created in 2018, to ease the investments and resolve challenges experienced by UAE investors in India.

ii.In this context, both sides agreed to make the best use of these mechanisms to further facilitate bilateral cooperation.

iii.The issues related to the development and operation of UAE-based funds to invest in India, that includes the SEBI Foreign Portfolio Investor Regulations 2019, were also discussed.

iv.The other key point of discussion focused on cooperation and potential investments in key sectors in India including the healthcare and pharmaceutical industry, etc.,

i.On September 7, 2020 India- Angola Joint Commission held its 1st meeting through video-conferencing. The session was co-chaired by Dr. Subrahmanyam Jaishankar, External Affairs Minister of India, and AmbassadorTéte António, Minister of External Relations of the Republic of Angola. 3 pacts were signed between India and Angola.