On February 24, 2020, Union HRD Minister Shri Ramesh Pokhriyal Nishank presented Chhatra Vishwakarma Awards (CVA) 2019 to 23 teams under 8 sub- categories during an ocassion in New Delhi. The award function was organised by All India Council for Technical Education (AICTE). Apart from CVA, 6 institutes were felicitated under the Utkrisht Santhan Vishwakarma Award (USVA). This was the 3rd edition of awards. The winners are recognized for their projects on the theme of “How to enhance the income of Village”. 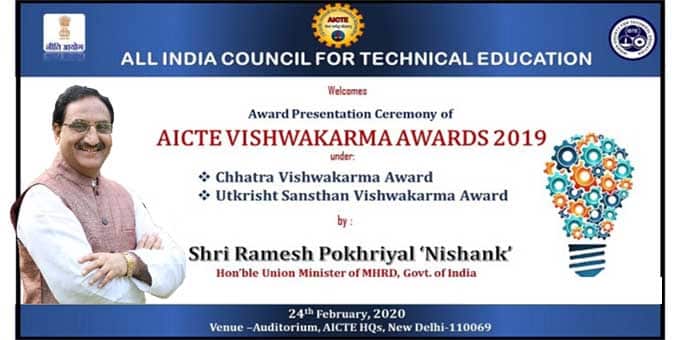 -A total of 188 nominations were received under USVA. After a detailed scrutiny six institutes have been felicitated during the event. Three institutes were honoured with certificates for their meritorious work in the village development while another three were recognised for best practices.

–NITI Aayog will support the shortlisted students by bringing their ideas into reality through their pre-incubation centres of ATAL Community Innovation centre (ACIC).

–AICTE & MHRD (Ministry of Human Resource and Development) Innovation Cell will provide financial assistance to a few of the best teams of CVA.

–IIT (Indian Institute of Technology) Delhi has also agreed to support the best technical interventions of Vishwakarma Awards through their Unnat Bharat Abhiyaan (UBA) program by providing financial support to the institution for implementing their ideas in the village.

About Vishwakarma Awards:
AICTE has been organizing Vishwakarma Awards since the year 2017.  The Awards are aimed at motivating young individuals, inspiring leaders and institutions to raise their performance in their specific domains leading to significant contribution towards the growth and development of the Nation. These are provided under CVA and USVA.