The Ministry of Home Affairs has amended the provisions of the Arms Act, 1959 and the Arms Rules, 2016 to provide adequate firearms and ammunition to the shooters for their practice. 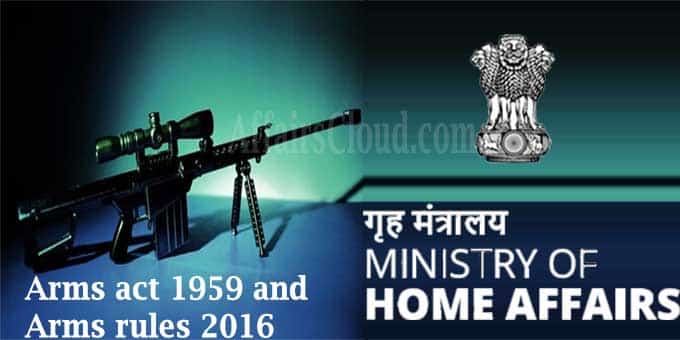 -The amendment has increased the number of additional weapons kept by International Medalists/Renowned Shooters to 12 from 7 under the exempted category.

-If a shooter is renowned in one event, he can keep maximum 8 weapons, which were earlier 4.

-If a shooter is renowned in two events he can keep maximum 10 firearms, previously the number was 7.

-If a shooter is renowned in more than two events, he can keep maximum 12 (previously it was 7) firearms under exempted category.

-Apart from the above exemptions, the shooters are entitled to possess two firearms as normal citizens under provisions of the Arms Act, 1959.

Amendments in Arms Rules, 2016:
The ministry has also amended the provision under Rule 40 of the Arms Rules, 2016 stating an increase in the quantity of ammunition that can be purchased by the shooters during the year for the practice.

-Ministry of Home Affairs has also made other necessary amendments in the Arms Rules, 2016 by amending the Arms Act, 1959, vide the Arms (Amendment) Act, 2019.

-A per the new amendments, no licence is required for Indian citizens for acquisitions, possession of small arms falling under the category of curio. However, appropriate licence would be required for use or to carry or transport such small arms.

-As per the provisions of the Arms (Amendment) Act, 2019, maximum number of firearms to be possessed by any person has been reduced from three to two. Those in possession of three fire arms have to surrender the excess gun by 13.12.2020.