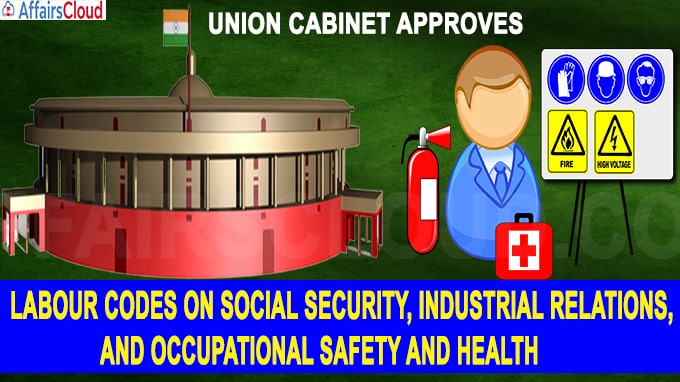 The Codes includes benefits like pension, medical benefits to gig workers (Independent contractors, online platform workers, contract workers, on-call workers and temporary workers), and will allow states to introduces significant changes to their labour laws framework, such as rules for retrenchment (act of cutting down or reduction) through notifications.

Code on Wages has already been passed by the Parliament on July 30, 2019, and the 3 remaining Codes were sent to the Parliamentary Standing Committee on Labour for scrutiny. The Committee submitted its report on the Three Codes.

Point to be Noted:-

In June, 2020, The Ministry for Labour and Employment decided to condense 44 Central Labour Laws into Four Codes on Wages, Social Security, Industrial Relations (IR), and Occupational Safety and Health (OSH) based on the recommendations of the Second National Commission on Labour.

i.The codes will clearly define areas and conditions in which fixed-term employment will be allowed.

ii.The amendments include a clear definition of the ‘appropriate authority’ on occupational safety. It removes the distinction between term employees and workers in the Industrial Relations Code(IR).

iii.The IR Code also suggests special provisions for layoff and retrenchment in establishments which employ 100 or more workers or such number notified by the appropriate government.  It will also strengthen the health facilities for workers at factory premises.

v.The passing of Four Codes is expected to help Foreign Companies do business in India, which will be crucial in view of Economic Recession.

iii.Code on Industrial Relations – combines laws on industrial disputes, trade unions and others.

i.On May 8, 2020 The Uttar Pradesh(UP) government has passed an ordinance ‘Uttar Pradesh Temporary Exemption from Certain Labour Laws Ordinance, 2020’, to suspend most of the labour laws for 3 years, where all factories & manufacturing establishments will be exempt from existing labour laws except few.

ii.The Ministry of Labour and Employment has declared banking industry as a public utility service (PUS) for six months starting April 21, 2020 till October 21, 2020 under the provisions of the Industrial Disputes Act,1947.