Tow-Day National TB Summit, for raising awareness and increasing momentum to fight against TB is being held in Dharamshala, Himachal Pradesh on 7th and 8th April. The TB Summit will conclude with a friendly cricket match between Bollywood celebrities and Members of Parliament.

Joint Organisers of the TB Summit: 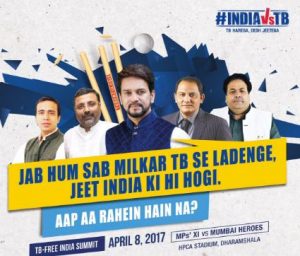 On second day of the summit a friendly T20 cricket match dubbed as India Vs. TB will be played between teams of Bollywood celebrities and Members of Parliament at Dharamshala Cricket Stadium. The Bollywood team will be led by actor Bobby Deol, whereas Lok Sabha Member Anurag Thakur will lead the MPs team.

Tuberculosis (TB) is a contagious disease which affects the lung and is caused by Mycobacterium tuberculosis (MTB). Cough, fever, weight loss and night sweats are typical symptoms of TB. It is an airborne disease i.e. transmitted through air.

TB is one of the most serious health challenges faced by India. India is home to 27% of TB patients and accounts for 38% of TB deaths worldwide.