The two-day BRICS Convention on Tourism was flagged off on September 1 in Khajuraho Madhya Pradesh. The BRICS nations were represented by the Minister of Tourism, South Africa Mr. D.A. Hanekom and delegations from Russia and China.

BRICS is the acronym for an association of five major emerging national economies: Brazil, Russia, India, China and South Africa. Originally the first four were grouped as “BRIC” (or “the BRICs”), before the controversial addition of South Africa in 2010.

Tourism Ministers of BRICS countries Met at the world-famous temple city Khajuraho for a two-day long conference that began today. 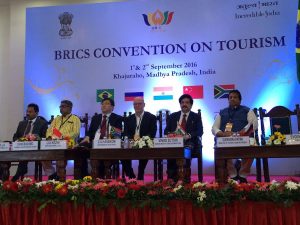