As mentioned in the Budget Announcements 2016-17, Minister of Railways Shri Suresh Prabhakar Prabhu launched following services from Rail Bhawan on 1st September 2016. The several services are as follows

Train Superintendent (TS) will be made single person responsible for all facilities on train. All railway personnel and Supervisors of all out sourced agencies shall report to the TS for effective control and supervision to ensure improvement in on board services offered by Railways.

Retiring Room can be booked for a minimum period of three hours up to a maximum period of 48 hours.Hourly booking is not allowed for the principle block of 12 hours period
i.e. from 2100 hours to 0900 hours and the tariff would be charged on hourly basis. 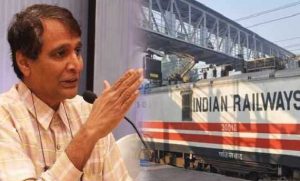 The proposed tariff to be charged as follows,

Container traffic was started on Indian Railways in the early eighties to garner piecemeal domestic traffic, which had been lost with the shift in IR’s policy to move from piecemeal mixed train operations to end to end block train operations.

The facility is reserved for passengers of Indian Railways who book e-ticket, excluding suburban trains, through its official website, irrespective of the class of the ticket.

Minister of Railways Launched and Dedicated Various Services to the Nation