Japanese people elected Yuriko Koike as the first woman governor of Tokyo on July 31. It is noted that she is a former defense minister of Japan. This appointment will play a key in the preparations of the Olympics 2020 which is going to be held in Tokyo.

Who is Yuriko Koike?

Yuriko Koike is a Japanese politician and member of the House of Representatives of Japan from 1993 to 2016. 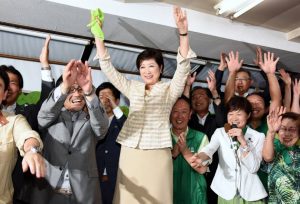