About 50 most powerful women:-

Banco Santander group executive chairman Ana Botín repeats as No. 1, in a time of economic and political volatility for all. The 2016 list spans 19 countries and is comprised of 16% new names. 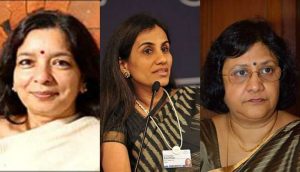 The top 10 posotions belongs to,

Chanda Kochhar(born 17 November 1961) is the managing director (MD) and chief executive officer (CEO) of ICICI Bank. She is widely recognised for her role in shaping retail banking in India.