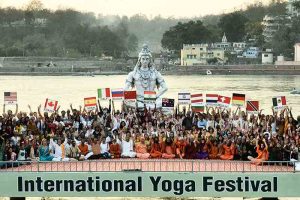 Organised by: Ministry of AYUSH

Secretary of AYUSH, Shri Ajit Sharan highlighted that Yoga Olympiad being organised by NCERT in view of the need to popularize Yoga among the youth

Prime Minister led First International Yoga day was observed on 21st June and observed world over by millions on the same day.

Participated by: 35,000 people including dignitaries from 84 countries
Performed 21 yoga Asanas for 35 minutes

Now it is decided that Chandigarh the dual capital of Punjab and Haryana on June 21st of 2016 to host International Yoga day.