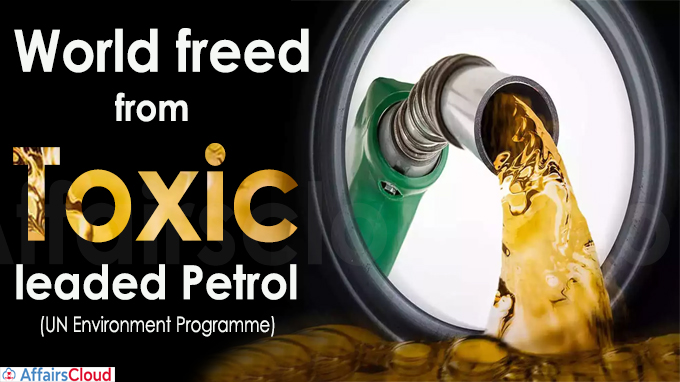 The United Nations Programme on Environment(UNEP) formally stated that, toxic leaded Petrol was Eradicated from the World.It was achieved after the Campaign, that was launched by UNEP in association with the Partnership for Clean Fuels and Vehicles (PCFV) to eradicate the toxic leaded Petrol in 2002.

i.The toxic fuel has contaminated air, soil and water for almost a century.

ii.Most of the high income countries like USA, UK, Canada etc have banned the fuel by the 1980s.

iii.It has prevented more than 1.2 million premature deaths and saved around USD2.4 trillion annually, confirmed by the UNEP. Now there is no country in the world using leaded petrol.

iv.The addition of tetraethyl lead to petrol had spread widely practiced by  all countries soon after its anti-knock and octane-boosting properties were discovered. This has damaged the environment to an extreme level.