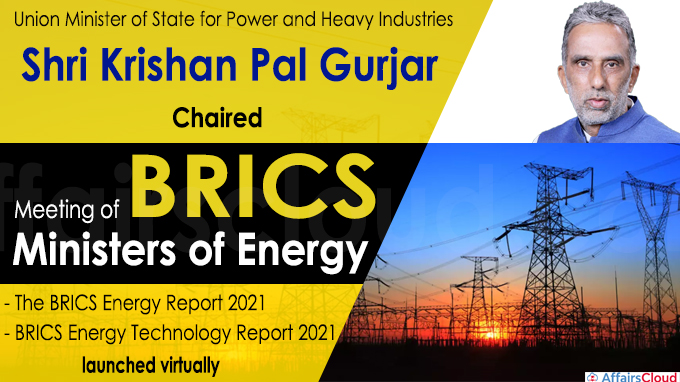 It should be noted that this meeting was the concluding event as part of the energy dialogue between member countries since April 2021. Under this dialogue, various events like hydrogen webinar, building energy efficiency and battery storage were conducted with the participation of a large number of experts from BRICS nations.

i.Emphasis were laid upon the need of promoting energy efficiency and renewables to climate change effects.

iii.India reiterated its focus on the ‘one sun, one world, one grid’ initiative proposed by Prime Minister Narendra Modi.

i.For 2022, the Presidency of BRICS will be taken over by China.

On 2nd July 2021, India virtually hosted the 6th BRICS Culture Ministers meeting 2021 under the chairship of Prahlad Singh Patel, Minister of State (I/C) for Culture and Tourism. The meeting saw the participation of the Minister of Culture from the BRICS member countries (Brazil, Russia, India, China, and South Africa). The meeting was conducted under the theme – “Bonding and Harmonizing Cultural Synergy”