Jayalalitha was born on 24 February 1948 at Melukote, Pandavapura taluka, Mandya district in Karnataka to Jayaram and Vedavalli in a Tamil Brahmin (Iyengar) family.

About Her Early Career Life

Jayalalitha was a leading actress before her entry into politics and had entered into film industry when she was 16 years old.

About her Political Life

She was the general secretary of All India Anna Dravida Munnetra Kazhagam (AIADMK) and was popularly referred as Amma, Puratchi Thalaivi, Thanga Gopuram, Thanga Chillaiand Thanga Tharagai (Golden Maiden) by her followers.

Jayalaithaa has launched several welfare schemes that were really beneficial for the poor, middle class, farmers, students and many other sections. 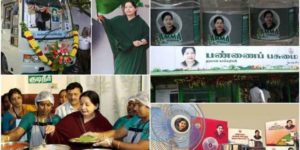 The AIADMK government rolled out more than a hundred pharmacies in the state to sell medicines at a discount of about 15 percent over their market price.

In 2015, Jayalalithaa launched Amma Kaipesi Thittam scheme under which about 20,000 self-help groups (SHG) trainers were provided computerized mobile phones with special Tamil software to help them in their work.

Biography of Tamil Nadu chief minister ‘Amma: Jayalalithaa’s Journey from Movie Star to Political Queen’ has been written by Vasanthi.