A study by the University of Hyderabad and the Indian Institute of Technology – Bombay suggests that the extreme El Nino that occurred in 2015 played an important role in Chennai’s heavy rainfall. After 1982 and 1997, the 2015 event also turned out to be an extreme El Nino event. 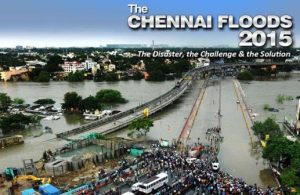 What is El Nino?

El Nino generally causes less than normal rainfall in the case of the southwest monsoon. In contrast, it brings about above-normal rainfall during the northeast monsoon. This is because of the difference in seasonal wind patterns between the two monsoons.

Problem was also  with poor town planning of the town.There was improper design and maintenance of drainage systems. The canals were blocked and there was no way the excess rain could be drained.