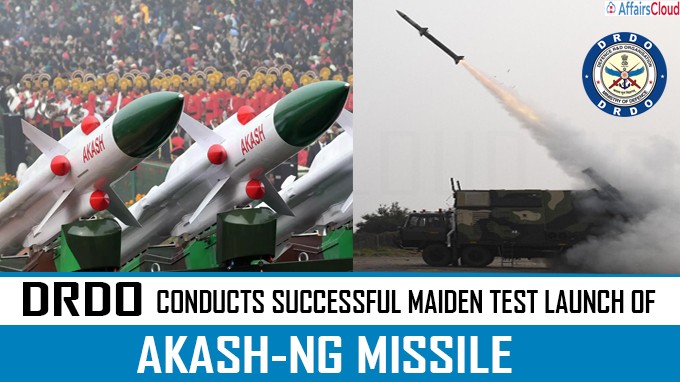 On January 25-26, 2021, Defence Research and Development Organisation (DRDO) successfully conducted the maiden launch of Akash-NG (New Generation) Surface to Air Missile (SAM) from Integrated Test Range of Balasore, off the coast of Odisha, along with Bharat Dynamics Limited (BDL) & Bharat Electronics Limited (BEL). It has strike range of 30 km.

Objective- The missile has been developed for the Indian Air Force (IAF) use with an aim of intercepting high maneuvering low Radar cross-section (RCS) aerial threats.

Features of the Missile:

–Akash SAM detects enemy fighters at ranges out to 80 km. By the time the enemy aircraft is 50 km away, the Akash NG’s computers have calculated the launch trajectory and impact point, and the missile is launched.

–The launch met all the test objectives.

–The performance of the Command and Control system, onboard avionics and aerodynamic configuration of the missile was also successfully validated during the trial.

During the test launch, entire flight path of the missile was monitored and the flight data was captured by various Range instruments.