On October 23 and 24, 2019 The government of the island nation Sri Lanka along with the support of the United Nations (UN) Environment Programme (UNEP) convened (brought a meeting) a 2-day event at the Bandaranaike Memorial International Conference Hall (BMICH) where the members came together and adopted “Colombo Declaration on Sustainable Nitrogen Management”. The aim of the declaration is to halve the nitrogen waste by 2030. 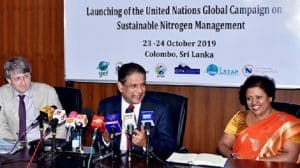 Key points
i.Campaign: As part of the Declaration, all the environment ministers and officials representing more than 30 countries endorsed UN plans for a campaign on nitrogen management called ‘Nitrogen for Life’.
ii. Declaration framing: The declaration framed, was based on the sustainable management resolution which was adopted during the 4 session of the UN Environment Assembly held in Nairobi, Kenya in March 2019.
iii. Technical support: The Colombo Declaration has been developed with technical support of the International Nitrogen Management System (INMS) of the UNEP and the International Nitrogen Initiative supported by the Global Environmental Facility(GEF).