The Crown Prince of Abu Dhabi Sheikh Mohammed Bin Zayed Al Nahyan was on a three day visit to India from January 25-27, 2017 to be the Chief Guest at the 68th Republic Day Celebration on January 26, 2017 in New Delhi.

The visit also marks a historic and proud moment for the UAE and the Arab World as for the first time its troops comprising a mix from the army, navy and air force lead the parade at 68th Republic Day celebration in New Delhi. 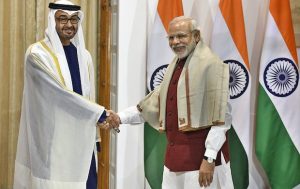 Aim: Bilateral cooperation in areas identified under the comprehensive strategic partnership that was agreed upon in the high-level joint statements issued in the August 2015 and February 2016.

4.MOU between Directorate General of Shipping, India and Federal Transport Authority- Land and Maritime, UAE on Mutual Recognition of Certificates of Competency as per the provisions of the Standards of Training, Certification and Watch-keeping Convention (STCW78) and amendments

Aim: Deepen the maritime economic activities in general by establishing a framework for Mutual Recognition of Certificates of Competency of marine officers, engineers and crews.

5.MoU between Ministry of Road Transport and Highways, India and Federal Transport Authority, Land and Maritime, UAE on Bilateral Cooperation in road, transport and highways sector

6.MOU on cooperation in prevention and combating of human trafficking

Aim: Enhance bilateral cooperation on the issue of prevention, rescue, recovery and repatriation related to human trafficking, especially of women and children expeditiously.

Aim:Develop a framework for cooperation in various agricultural fields of mutual interest including cooperation in food processing and transfer of technology in cultivation methods.

9.MOU on mutual exemption of entry visa requirements to the holders of diplomatic, special and official passports

Aim:Strengthen ties between Prasar Bharati and Emirates News Agency (WAM), UAE through cooperation in the field of broadcasting, mutual exchange of programmes, news and best practices.

11.MoU between Ministry of Commerce and Industry, India and Ministry of Economy, UAE on trade remedial measures to promote cooperation in areas of mutual interest

Aim:Enhance cooperation in the field of anti-dumping and allied duties through exchange of information, capacity-building, seminars and trainings in mutually identified areas related to trade remedial measures.

Aim:Establish a framework for the storage of crude oil by Abu Dhabi National Oil Company in India and further strengthen the strategic relationship between the two countries in the field of energy.

During the first half of 2016, the bilateral trade between the UAE and India was calculated at USD 17 billion. Out of this, UAE’s import from India rose to USD 11 billion while the non-oil exports to India reached USD 6 billion during the same period.

India and the UAE committed to further boost wide-range of bilateral engagements in strategic areas of security, defence, energy. Both the nations decided to set up an action plan by June 2017 comprising of a medium and long term strategy to further increase bilateral trade by 60 percent over the next five years.

Prime Minister Narendra Modi and the visiting Crown Prince issued a joint statement on January 26, 2017 to oppose terrorism in all its forms and manifestations, wherever committed and by whomever, and declared that there could be no justification for terrorism anywhere.