On February 17, 2020, The Supreme Court(SC) bench of Justices  D.Y. Chandrachud and Ajay Rastogi dismissed the central government’s submission that women have physiological and domestic limitations , agreed on Delhi High Court’s decision about eligibility of permanent commission and command post to short service commissioned (SSC) women officers in the Indian army.

Supreme Court ordered the government to implement its judgment in 3 months and judgement finalized of 10-year-old appeal filed by the government against the 2010 decision of the Delhi High Court (HC). 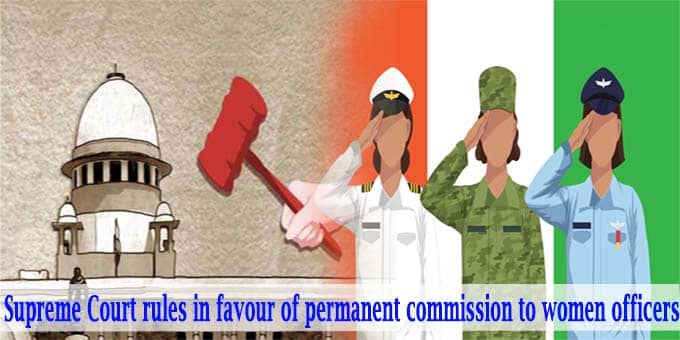 iv.Background:
Women officers in the Indian Military Service are recruited through the Short Service Commission (SSC) and can work in the army for a period of 10 years, extendable up to 14 years. However, they are not given pension even after retirement due to not being able to work for 20 years.
Male SSC officers can get permanent commission at the end of 10 years of service,but this option was not available to women officers.