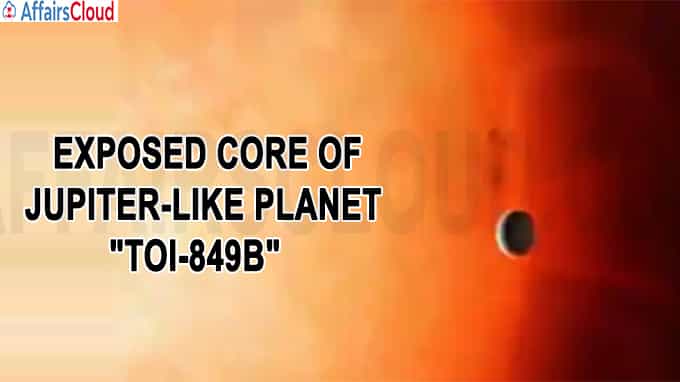 On 1st July 2020, The researchers spotted a Jupiter-like planet, 39 times more massive than the Earth, orbiting around a distant star with temperature lower than the Sun, the planet is located around 730 light years away from Earth. The astronomers named the planet TOI-849b. This is the first ever planetary core to be found by the astronomers.

The study was made by the team led by Dr David Armstrong from the University of Warwick’s Department of Physics.

i.The diameter of the planet is around 43,500 Km which is lesser than Neptune, the smallest gas planet of the solar system and larger than the diameter of Earth.

ii.The planet orbits around its host star at a closer range similar to the distance between the mercury and the sun.

iii.The planet orbits around its host star at a speed 10 times faster than the Earth’s orbiting speed, it completes one revolution in 18 hours.

iv.The surface temperature of the planet is around 15000 degree Celsius.

v.The atmosphere around the solid cores of the planets consist of Hydrogen(H) and Helium(He).

Discovery and Analysis of TOI-849b:

i.TOI-849b was found in a survey of stars by NASA’s  Transiting Exoplanet Survey Satellite (TESS).

ii.This planet will enable the researchers to get a better understanding about the gas planets like Jupiter.

iii.The researchers concluded that this might be a surviving core of any planet that was larger than Jupiter.

iv.It is assumed that the planet might have lost its outer envelope due to some evolution or the atmosphere of the planet was stripped due to its close proximity to its host star.