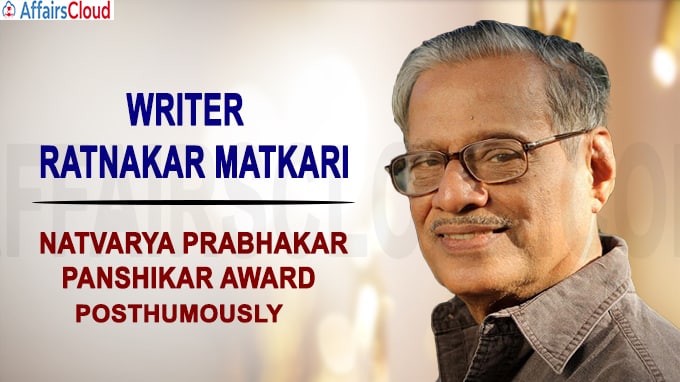 On 2nd July 2020, The Government of Maharashtra announced that  Marathi writer and playwright Ratnakar Matkari will be posthumously honoured with the Natvarya Prabhakar Panshikar award for his lifetime contribution to the theaters and arts.

ii.The committee headed by Amit Deshmukh, Minister of Culture,  selected Matkari for the Natvarya Prabhakar Panshikar award 2019-2020 and the announcement was delayed due to Covid-19 pandemic.

i.He was well known for his contribution to Marathi literature in the form of short stories, plays and novels.

ii.He was a pioneer of the children drama movement in Marathi and he has written numerous novels for children.

iv.He was also a director and producer in the Marathi film industry and directed movies like Prem Kahani, State Lote, Lokakatha 78 among others.

v.He was a columnist in the 1970 and contributed to numerous newspapers and magazines.

i.He was the recipient of Dadasaheb Phalke award 1986 for his scripts and directorial merits.

iii.He won the Sahitya Akademi’s Bal Sahitya Puraskar in 2018 for his contributions in children’s literature.