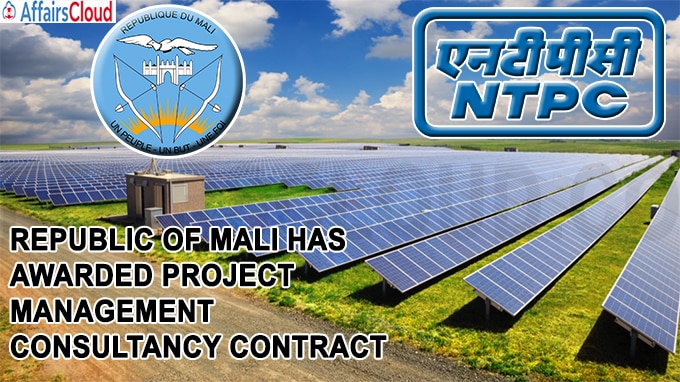 On 24th June 2020, The Republic of Mali awarded the Project Management Consultancy (PMC) contract for the development of a 500 MW solar park in Mali to NTPC Limited (formerly known as National Thermal Power Corporation Limited). In the event chaired by RK Singh, Minister of State for Power and President of International Solar Alliance (ISA), Sekou Kasse, Ambassador of Mali handed the award letter to Gurdeep Singh, Chairman & Managing Director (CMD) of NTPC.

Initiatives by Republic of Mali:

i.To support the electricity requirements of their citizens, the Republic of Mali has taken various initiatives with more focus on Solar power and its applications.

ii.This development of solar projects is expected to boost the socio-economic growth of Mali.

i.The ISA endorsed NTPC as a PMC in 2019 through a competitive process for member countries to get the services of NTPC.

ii.The Republic of Togo awarded NTPC with a similar PMC for the development of 285 MW Solar Park in Tago.

iii.The NTPC has the installed capacity of around 62,110 MW and is experienced in setting up Solar projects and handling solar programs like National Solar Mission in India.

iv.In the next 2 years the NTPC plans to establish 10,000 MW of Solar parks in ISA countries.