Directions(1-5):Study the following information carefully and answer the given questions.

Directions (6-10): Study the following information carefully and answer the given questions.

Eight friends Damodar, Dinesh, Daniel, Deepak, Devi, Deepti, Dilip and Divya are sitting around a square table in such a way that four of them sit at four corners while four sit in the middle of each of the four sides, but not necessarily in the same order. Each one of them like different colours viz. Green, Yellow, Black, Purple, Pink, White, Orange and Red. The one who sit in the middle of the sides face the centre while those who sit at the four corners face outside(i.e opposite to the centre). 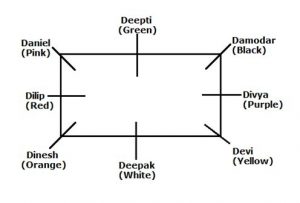