Eight persons S,R,H,I,T,G,Q,F are sitting in a line, some of them are facing north some of them are facing south. S is second from one end. R is sitting third to the left from S. Neighbour of R facing south. I do not sit at any of the extreme ends. Immediate neighbours of I face North. Immediate neighbours of H faces south. F is third to the left of T. Q sits immediate left of G.

Eight players – P, Q, R, S, T, U, V and W sit around a square table in such a way that four of them sit on the four sides while the rest at corners. They play different games namely Football, Basketball, Badminton, Tennis, Cricket, Volleyball, Golf and Squash. Some of them are facing the centre while some are facing outside.(i.e away from the centre) 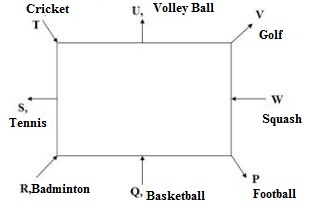