Welcome to Online Reasoning Section in AffairsCloud.com. Here we are creating question sample in Puzzles set, which is common for all the IBPS,SBI, RBI, IPPB, IDBI exam and other competitive exams. We have included Some questions that are repeatedly asked in bank exams !!!

I. Study the following information carefully to answer the given questions

Gopi, Nithya, Shilpa, Renu, Gowtham, Priya, Prasanth and Sridhar are sitting around a square table in such a waythat four of them sit at four corners of the square while four sit in the middleof each of the four sides. The ones who sit at the four corners face the centrewhile those who sit in the middle of the sides face outside. 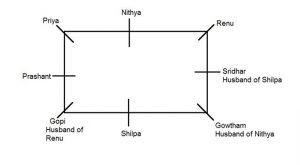 II. Study the following information carefully and answer the questions given below:

Six friends — Arun, Sathish, Yogesh, Ganesh, Peter and Hemantharestudying six different specialisations of engineering which are — metallurgy,telecommunication, software, mechanical, electrical and hardware notnecessarily in the same order. Each one likes a different sport – hockey, cricket,swimming, football, badminton and tennis again not in the same order.