Direction(1-5): Study the following information carefully to answer the given questions

There are seven Indian footballers, namely A, B, C, D, E, F and G. Each of them belongs to a different state like Maharashtra, Jharkhand, UP, Punjab, Delhi, Karnataka and Tamil Nadu. Moreover, each of them also has a liking for different foods, namely Chicken Tikka, Veg. Biryani, Fish Curry, Chicken Biryani, Mutter Paneer, Mutton Curry and Afghani Chicken but not necessarily in the same order.
A, who likes Fish Curry, is neither from Maharashtra nor from Punjab.
E is not from Jharkhand and does not like Chicken Tikka. F, who hails from Tamil Nadu, does not like Veg. Biryani.
D, who likes Afghani Chicken, is not from Karnataka. The one who is from Jharkhand is fond of Mutton Curry.
C likes Mutter Paneer and is from UP while B, who likes Veg. Biryani is from Delhi.

Direction(6-10): Study the following information carefully to answer the given questions

Eight persons from different companies, like Hero, Honda, Bajaj, TVS, Harley Davidson, Royal Enfield, KTM and Suzuki are sitting in two parallel rows containing four persons each in such a way that there is an equal distance between adjacent persons. In row 1- P, Q, R and S are sitting and all of them are facing north. In row – 2, A, B, C and D are sitting and all of them are facing south- Therefore, in the given seating arrangement each member sitting in a row faces another member of the other row. All the information given above does not necessarily represent the; order of seating, as in the final arrangement. 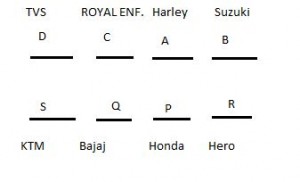